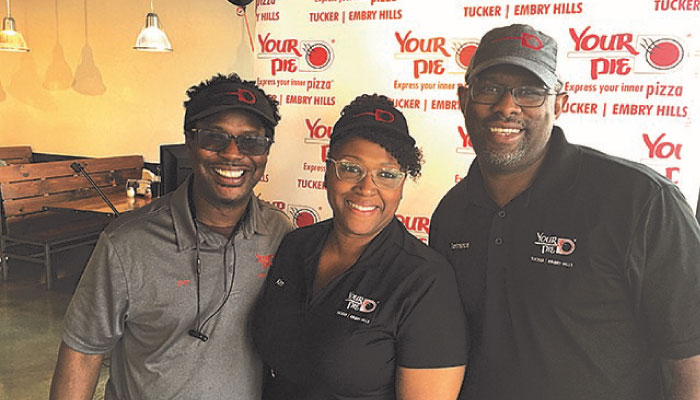 This article was originally published in theCHAMPION on 10/29/19.

A small family mishap led to a new business pursuit for the Griffin family, according to Terrence Griffin, who owns Your Pie Tucker with his wife Kimberly and his brother Cory. “Our daughter brought home a pizza, but the dog ate it,” he explained. “I went to the Your Pie near our home in Snellville for a replacement and I immediately thought ‘I like this place; I want to own one of these.’”

Coincidentally, Kimberly Griffin had visited the same Your Pie earlier that week and was equally impressed. “We had talked about buying a food-related business and when I first entered a Your Pie, I loved the clean, modern décor, the family-friendly atmosphere and the food,” she recalled. “When my husband mentioned it, I was already on board.”

Cory, whose business experience is in the food industry, said he agreed that the food was excellent. “On a scale of one to 10, I’d give it a 9.99,” he said. “There are pizza restaurants all over the Atlanta area. I wouldn’t think of opening one unless we offered a superior dining experience.”

Your Pie Tucker, in the Embry Hills Shopping Center on Chamblee Tucker Road, celebrated its first anniversary on Oct. 5 with live music, special prices and other features. “This has turned out to be a great place to open our business,” commented Kimberly, who added, “The Embry Hills area is really growing and thriving. Many people who work in the businesses here like to come in for lunch and in the evenings, we get lots of families. We’re really proud that in one year, we’ve really become part of the community.”

Kimberly added that she likes the fact that the national chain had Georgia roots as well as a charming family story. Drew and Natalie French, the couple who founded Your Pie, honeymooned in 2006 on the island of Ischia, off the coast of Naples, Italy, where Natalie had family. While there Drew tasted pizza superior to any he had ever had, according to the couple’s story posted online and within each store. Two years later, the couple opened the first Your Pie in Athens, Ga. Your Pie now has 70 locations in 19 states.
“I realized that cooking on an open flame in a brick oven was the way to serve the best tasting pizza in the world, and speed was an awesome byproduct,” the posting written by Drew states. “In Italy, I also learned the importance of great dough, sauce, cheese and ingredients. Italians use smaller portions of simple ingredients that are both high-quality and fresh.”

The Griffins say they not only follow the founders’ lead in terms of food preparation but in customer service as well. “Their policy is to never serve a guest an improperly cooked pizza and that’s our policy as well,” said Kimberly, adding that Your Pie Tucker also embraces their philosophy of making each store a community fixture. “In Italy, neighborhood restaurants are community gathering places; that’s the ambiance we work to establish every day.”

The name Your Pie reflects the menu which allows customers to customize their orders from the base up. They may choose from a base from white dough, wheat dough, gluten-free dough, bread bowl, panini bread salad green and penne pasta. To that the customer may add any of seven sauces, including a classic marinara, basil pesto and alfredo. There are seven cheeses, including a vegan cheese. More than 25 meats and vegetables can be added as topping.

For the customer who’s unsure, Your Pie has a few favorites to suggest—each with a name inspired by the chain’s origins. Ischia is an olive oil, mozzarella, tomato, basil and garlic combination and the Nat features basil pesto, mozzarella, feta, sun-dried tomatoes, spinach and chicken.

Terrence said they especially like Tucker’s Embry Hills area’s strong sense of community. “It’s perfect for a business like ours,” he noted, adding that like other restaurants in the Your Pie Chain, Your Pie Tucker strives to make a difference in their community by hosting fundraising nights for local charities, donating food to local events, and other such activities.