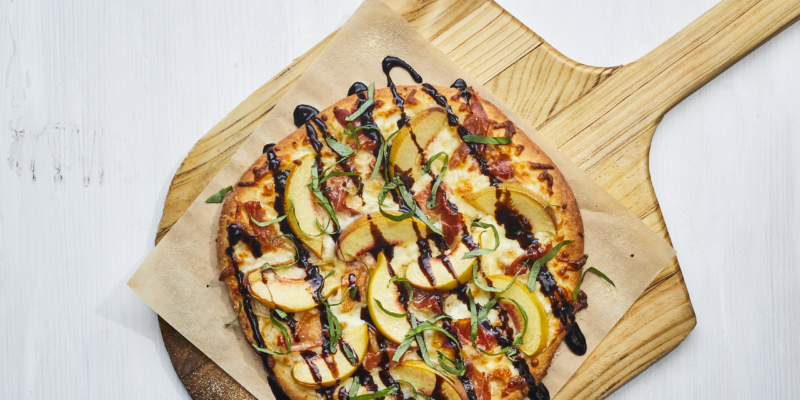 Atlanta, Georgia– Your Pie, the nation’s first fast-casual pizza franchise, announced the return of its popular Summer Peach Craft Series, which features fresh peaches on two of its summertime entrees.

Your Pie’s Summer Peach Craft Series menu is headlined by a limited time offer of the award-winning Peach & Prosciutto Pie. The pizza features olive oil, ricotta, prosciutto, mozzarella and parmesan cheeses, fresh peaches, basil and a honey-balsamic glaze. It was originally created by Your Pie founder Drew French as a tribute to the brand’s Italian influences and Georgia roots.

Your Pie began offering the Peach & Prosciutto Pie in 2015 and has continued to bring it back each summer since then. French earned a spot on the United States Pizza Team with the signature pie in 2016 and competed at the 2016 World Pizza Championship in Parma, Italy. The pie was named one of America’s Most Innovative Menu Items by QSR Magazine in 2017.

The Craft Series has been a seasonal feature of the Your Pie menu since the brand’s inception in 2008.  The Summer Peach Craft Series offerings launched on Monday, May 30.  It will be available for a limited time only at Your Pie restaurants across the country through July 31.

Here are the featured items on Your Pie’s Summer Peach Craft Series menu, which includes links to photos.   (Prices for each vary by location).

“We are excited to once again bring back the Summer Peach Craft Series, featuring an annual customer favorite, the Peach & Prosciutto Pie,” said Lisa Dimson, Chief Marketing Officer of Your Pie. “The Summer Peach Salad was a hit last year and the new White Chocolate Raspberry Swirl is a refreshing addition to the menu. Together, these items offer a unique flavor for our customers to enjoy during the summer months.”