Pizza with a Purpose 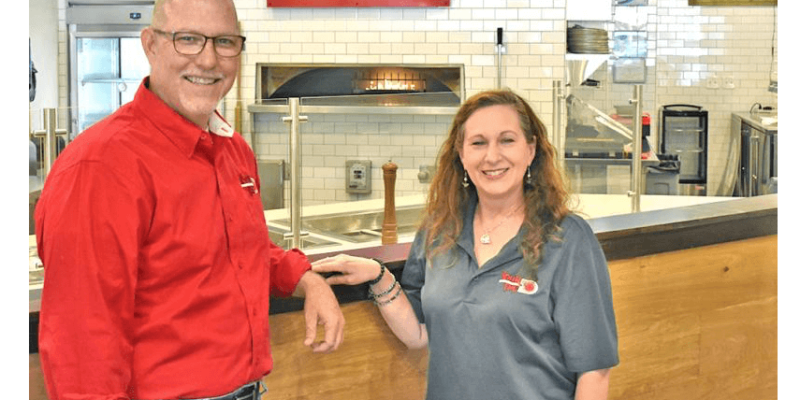 This article was originally published in The Dahlonega Nugget on 8/21/19.

Restaurant Serves Up Pizza With a Purpose

Local diners will soon be able to help themselves to free pizza, and help out Rainbow Children’s Home in the process. When Your Pie Dahlonega holds its Dine and Donate opening Aug. 26-28 it will be a true “from garden to table,” event—in more than one way. Not only will the build-your-own-pizza restaurant be using as much locally sourced produce as it can find, it also found the recipient of its pre-opening fundraiser in the garden—literally.

Your Pie is a franchise, but “family owned and operated,” said Todd Strickland, co-owner along with his wife, Rhonda. This is the couple’s third Your Pie restaurant. They also own establishments in Watkinsville and Clarkesville.

The Your Pie franchise opened its first restaurant in Athens 11 years ago.
“Rhonda tried it first and recommended we go there. I was blown away by the concept,” Todd said. “It was unlike anything I’d ever seen. The food was exceptional, and the atmosphere was really warm and inviting.”

The couple was also drawn to the company’s philosophy of giving back to the communities it serves. “Your Pie’s motto is ‘Give Back First,’” said District Manager Jennifer Watson. “So we began looking for a charity right away. We’d been looking for several weeks when Rainbow Children’s Home [RCH] popped up on the computer.”

RCH is a residence serving girls from 12-18 years of age who have been removed from their home due to abuse or neglect—or both. Its mission is to provide a secure environment where the girls can learn life skills that will help them become successful adults. They are given an opportunity to become involved in the community through volunteer service.

“This gives them the chance to learn the value of assisting others and provides a healthy outlet for expressing emotions and a way to feel good abut themselves and their accomplishments,” said Executive Director Melinda Frausto. Girls also participate in job shadowing, pet therapy, receive tutoring and the mentorship from women of the community. The Stricklands and Watson liked what they saw on the home’s website, and decided to visit and speak with Frausto. It just so happened to be on the day she was in the garden.

A volunteer planted the garden for the girls with the help of a home school group, but it was getting more and more full of weeds, Frausto said. “I kept looking at it and praying someone would come to help weed it, but God told me to do it myself. He said it would be a good example for the girls and provide an opportunity to talk to the staff about taking initiative when they saw something that needed to be done. But I felt like there was some other reason for me to be out there too.

“So there I was, no makeup, hair up in a bun with my jeans on and I look up and saw three people coming across the parking lot and nowhere to run,” she said.
They introduced themselves and said they’d like to speak with her. She invited them in and when they told her why they were there she said she “burst out laughing. I told them they could see I wasn’t afraid of hard work or getting my hands dirty, and that we value our volunteers and honor our contributors. I told him about my prayers that morning, and that I was sure they were here for a reason.” Todd, she said, started crying. “He told me God spoke to him, too. He said, ‘This is absolutely meant to be.’ He said our missions were the same, to serve our community and make it a better place. He said, ‘The people we serve are as important as the food we serve.’”

Yet another connection with Rainbow occurred when Amie Pittman was chosen to be the Your Pie Dahlonega manager. She had been a resident at RCH twice during her teenage years. She applied for the job and was chosen to be interviewed. “When Todd told me Rainbow would be the charity for the Dine and Donate, I burst into tears,” she said.

Pittman’s time at RCH was short—a couple of months when she was 14 and five months when she was 16. She missed the advantage of being there long-term. “They tried to pour some life lessons into me, but that’s was difficult to do. I didn’t know what it was like to be loved, and that discipline came with love. I was never taught that,” she said. “But they provided a home and support. I felt safe there.”

It would be several years and four children later before Pittman learned those life lessons—the hard way. “I was homeless, carless and jobless, with three kids and a baby on the way,” she said. “I went to a program in Toccoa and they helped with rent and babysitting. I realized I had to break the cycle. I got a car, a job, started tithing at my church, got a better job and kept tithing. I’ve paid my bills on my own for the last two years and now I’m training to be a manager for Your Pie Dahlonega,” she said.
“I follow Rainbow on Facebook, and if I could take my daughter [her youngest] with me I’d be there every day. God has been laying it on my heart for a long time that I need to do something. The teenage years are the most critical time for these girls. They need to be loved and valued, and I think they need that from someone who’s been where they are. The most important thing I’ve learned is that what you come from is not what you are and not what you deserve.”

The 10-inch pie is free. Your Pie Dahlonega is asking for donations to RCH. Salads, beverages—including beer and wine—and desserts will be available for purchase.
You can make reservations on Facebook at Your Pie Dahlonega.

“We did this in Clarkesville when we opened there and raised $7,000 for Circle of Hope,” Todd said. “I’m sure we’ll do just as well for Rainbow here.”