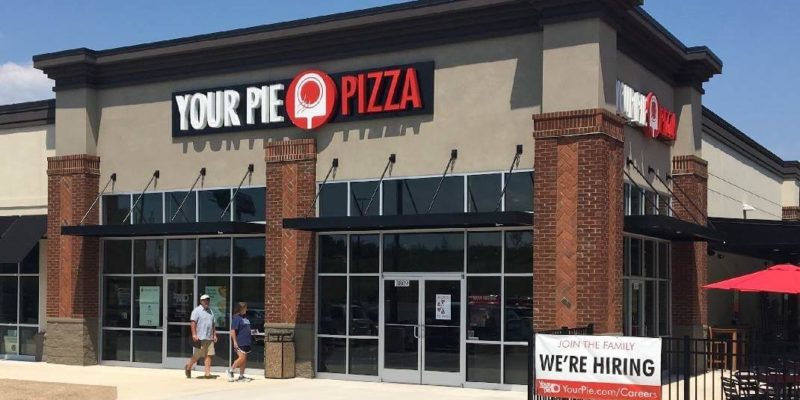 This article originally appeared in the Times Free Press on 8/19/19.

Sixteen months after Your Pie entered the Chattanooga market with its first location near Hamilton Place mall, another franchisee for the customizable pizza chain is opening a similar restaurant along Battlefield Parkway in Fort Oglethorpe.

Mark Brown, a commercial pilot for NetJets, and his wife Becky, a food caterer, will open a 2,800-square-foot Your Pie pizza outlet Friday.

“We hope to open several locations,” Brown said Monday during a luncheon preview of the new restaurant. “We hope to open other units in Cleveland, possibly Cartersville and probably one in either Dalton or Calhoun.”

Brown, who lives in Lafayette, Georgia, said he likes the family concept and community orientation of Your Pie and the ability of consumers to customize their individual pizza by selecting their favorite toppings from a bar, much like a subway line.

“We like pizza and beer and there’s a good market for that in a growing area like this,” he said. “As we learned more about the brand, we were impressed with the leadership and found that their values and mission aligned really well with our own. We love what they stand for, with a strong focus on serving the community and providing a family-friendly environment. We want to be the go-to family restaurant where every family member, no matter what age, can enjoy a good meal together with no need to compromise or sacrifice.”

Your Pie was founded in 2008 in Athens, Georgia by culinary entrepreneur Drew French, who aimed to create brick-oven pizza that allowed customers to pick from a variety of toppings. Your Pie began franchising in 2010 and has grown to nearly 70 stores across the United States, with about 50 other locations in development.

“At Your Pie, we believe that food can be fresh, fast, delicious and experiential,” said Drew French, one of the founders who serves as company president. “We want to be the go-to fast casual restaurant where families, friends, colleagues and groups can gather, dine and share memories without having to share pizzas.”

Brown said he has been working on opening the restaurant at Battlefield Parkway and Dietz Road for the past year and has hired about 30 full- and part-time workers for the new eatery. The new restaurant will be open from 11 a.m. to 10 p.m. daily.

Your Pie uses hand-tossed dough, only fresh ingredients, homemade pizza sauces and salad dressings, and offers vegan, vegetarian and gluten-free pizzas in addition to its traditional pizzas, chopped salads and paninis. The pizza is made from hand-made dough which is hand-tossed and Brown said each pizza includes all fresh ingredients and sells for one price of $8.49 each, regardless of toppings.